Highlines with no tension - a matter of style?

Maybe I'm just reproducing stuff that many people tried and some have already written about but I want to share these thoughts nevertheless.

In slacklining there is an obvious trend to low tension. Jerry Miszewski might have been the first to push this internationally. The Vienna Slackliners have also been rigging some really loose slacklines for some time now with Peter Auer sending a 150m longline at 10m sag two years ago. It took me quite some time to get used to this style and the last step for me was a trip with Julian Mittermaier, Lukas Irmler and Friedi Kühne: I got fascinated by the different kind of difficulty created by low tension lines. The funny thing is: Six years ago I was the first to ever set up and walk long rodeolines (50m, in the park) and was really inspired by the concept. (Maybe there were experiments like these in the 90s, but I doubt this would have been possible on stretchy tubular webbing.) But somehow I lost interest and got into "normal" longlining.

The highlines I tried lately were so loose that the thought of not tensioning them at all seemed pretty obvious (I had the idea last year in autumn). Thomas Buckingham explained a concept of tensioning a highline without a pulley system, only with a linegrip and a highslide. That was cool, but I wanted to try it without the linegrip: I wanted to go highlining without a tensioning system, as a matter of style. Why?
If you talk about style then it's worth remembering that it is mostly connected to certain self imposed restrictions. In mountaineering there is freeclimbing – only climbing on natural features – or trad – restricting yourself to natural protection only. This can be pretty serious but it seems to be worth the effort. I was always fascinated by the freedom you get by reducing your options. (A highline is just like that: I can hardly imagine a situation where you are more limited in you options than on a highline, but still you hardly ever feel so free.)
So I went highlining with Daniel Haberl and we didn't bring any tensioning system: We rigged a not very exposed 50m highline only by pulling webbing out of the banana by hand. Today we tried the same thing on a very exposed 30m highline. Dani and I sent both lines and they felt really cool. Especially the 30m was not too loose at all. 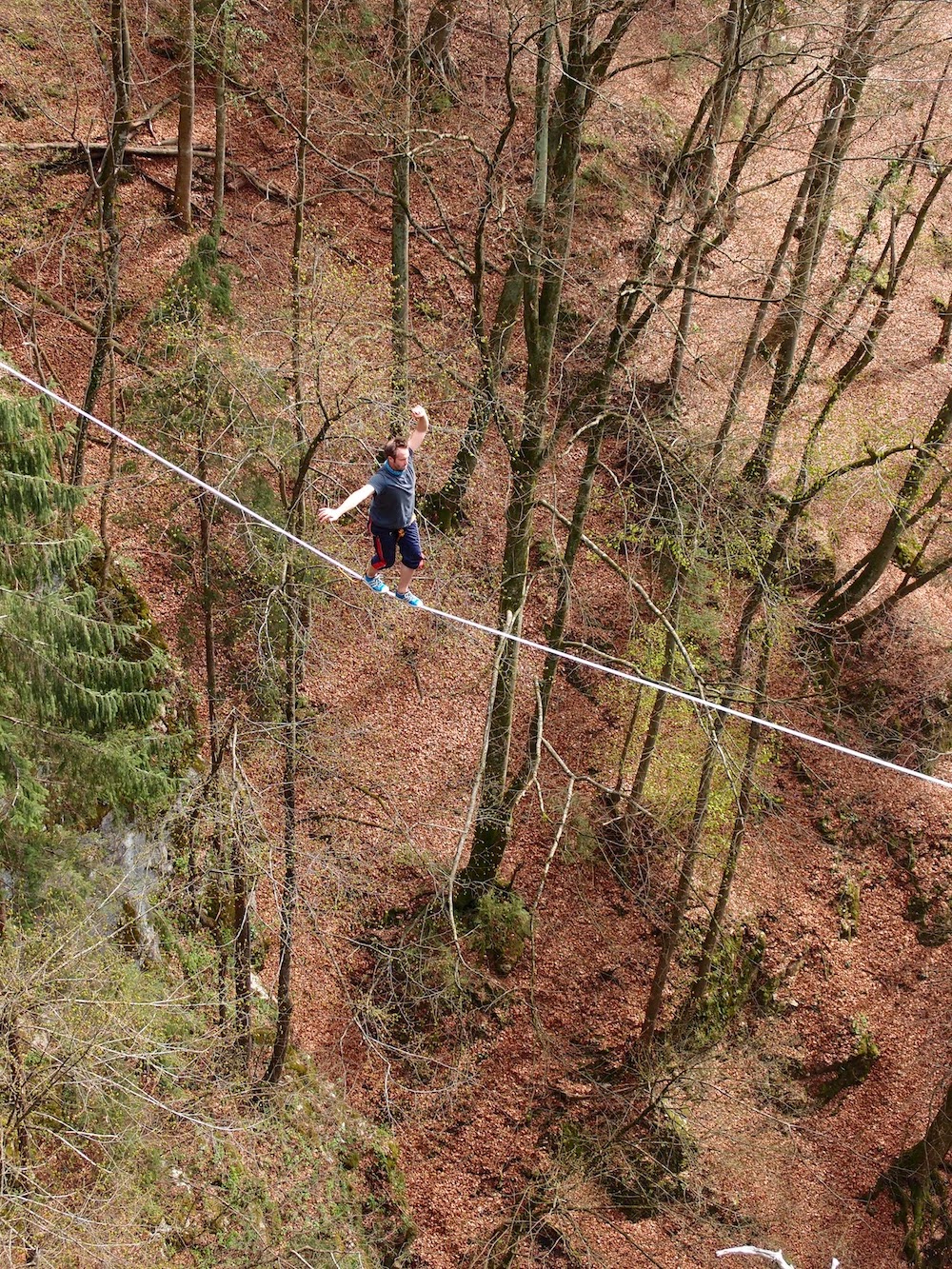 What I like about the concept is that it sets a limit to tension in a very natural way. It restricts you to a certain style. On the other hand it is easy and elegant because you need very little gear. All in all I love it and find it a very logical thing to do if you like low tension anyway.
(Btw.: This is not a statement against tensioning highlines. I would be the wrong person to say something like that.)

Some tips for all who want to try it: Obviously you need a release system. Sometimes the line gets loose enough that you can pull the pin out of the banana but you shouldn't rely on that. A big banana is good because the webbing glides well (I used a Zilla). And last but not least: Low stretch webbing works best. We used Core I for the 30m and Strong II for the 50m. (Leasfalls can be harder on low stretch webbing. I tried some on the 30m and they were okay but be careful on shorter lines.)

P.S.: Please don't call the thing "rodeo highline". The term "rodeoline" was ugly from the very beginning and sounds like there was something wrong with a loose line, like it would play rodeo with you. There is no calmer thing than a loose highline. An untensioned highline is just the way a slackline should be: slack.
Neuerer Post Älterer Post Startseite
"Slacklining is not a search for perfection or complete control - slacklining is a search for harmony with the uncontrolable and for absolute freedom of movement."